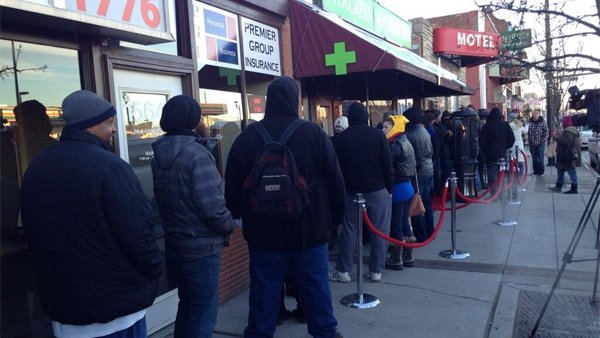 New Year’s Day, 2019, marks the five-year anniversary of the first legal, recreational cannabis sales in Colorado. The first person to make that historic purchase, and the first of its kind in the nation, was a Marine Corps veteran and cannabis activist named Sean Azzariti.

Surrounded by local, national, and international media, Azzariti purchased about $60 worth of flower and infused chocolate truffles at a Denver dispensary early on New Year’s Day 2014.

“I still have the entire first purchase,” says Azzariti. “I tried to give it to a few local museums shortly after, and they promptly turned me down, citing federal prohibition. I’m hoping in the next few years that will change and I can give it to a museum to display.”

Five years later, cannabis is still thriving in Colorado. With higher-than-expected sales and tax revenue, the Centennial state is putting that money to good use and has paved the way for legalization in many other states.

Memories From the Dispensary Front Lines

Tim Cullen, CEO of Colorado Harvest Company, vividly remembers the line of customers around the block of Evergreen Apothecary in Denver on New Year’s Day, 2014. A couple months later, he and his business partner were even concerned about running out of product.

But Colorado’s recreational cannabis sector now faces the opposite problem, given the state’s booming market. “That wholesale market has brought about an abundance of cannabis to the Colorado market and that has lowered the prices. And that’s one of the biggest benefits for consumers, is a dropping of prices,” says Cullen.

“Today, seven grams of the highest-grade cannabis in Colorado sells for $50 and maybe even less than that.”
Tim Cullen, CEO, Colorado Harvest Company

Cullen notes how five years of recreational pot sales have also helped to normalize marijuana in Colorado, both in terms of prices and as a commodity.

Before 2014, “on the black market, the gold standard was $100 for seven grams of you-don’t-even-know-what-you’re-getting,” he said.

“Today, seven grams of the highest-grade cannabis in Colorado [sells] for $50 and maybe even less than that. That’s a huge benefit, along with increased selection, for customers.”

“And that’s changed how people shop with us at the store,” he added. “With recreational marijuana we see people shopping like it’s a liquor store. People come in and just buy a couple of joints.”